The Stupidity of Heroism

I just had my own Tiananmen Square moment and it almost ended the same way.

I took a break from proofing my audiobook to take the dog for a bike ride. Beautiful day out. Leisurely ride, but very crowded out. I was stopped a number of times so people could play with or see my dog. We went to Hermosa Pier and sat on the bench while I read the news, people pet my dog, and I relaxed. This is something we often do, as my dog loves attention and it’s a way for me to tire my dog out without me getting tired.

For those who don’t know Hermosa Pier, it is a block of restaurants and stores adjacent to the beach. It is a walking path only and is blocked off in all directions. Police will cruise it in their cars sometimes, creeping at about 2 mph. If that.

As I’m sitting on the bench, I hear some motorcycles revving their engines at the adjacent parking lot. They were superbikes. They’re cranking it up to like 10K RPM. Just that high-pitched scream. It wasn’t constantly, just bursts, but it was enough to be annoying. I thought that when I rode off with my dog, I might poke in and ask the guy to keep it down. I figured he was just showing off.

Then I looked over my shoulder and saw a rider on a crotch rocket coming down the Pier! The area is packed with pedestrians. Cyclists. Dogs. Toddlers. You know, families with their baby carriages. No one is expecting traffic!

I’d seen a car unintentionally think the Pier was a thru street. I mean, it looks like a street. Except for all the people and barriers and signs that say it’s not a street. I guessed the motorcyclist screwed up. I picked up my bicycle, grabbed my dog’s leash, and we hurried over to the bike. I’m waving my arm to try and signal him it’s not a real street. He goes around me.

Then another bike comes! And I head to him and I get close enough that I’m telling him, “No, you can’t go this way. There’s people everywhere and little kids.” I even grabbed his shoulder. He moves away and motors on down the Pier and I can’t stop him. A third bike comes and now I hear more engines! This isn’t a simple mistake. These guys decided it would be cool to ride down Hermosa Pier on their motorcycles. I was like, holy shit.

I dropped my bike and I got directly in front of the third bike, stopping him. Realize, if he hit the accelerator, I’m getting run over. I ain’t so badass (or fat) that I can laugh off a superbike driving over me. I mean, this was the EXACT ending of Mad Max 1979, where she is killed by motorcycles. Except I’m not a pretty woman, holding a baby. I’m an ugly dude holding a dog.

But I managed to halt him. And he’s looking for a way to untangle himself from my idiot self. And I’m yelling and I got my phone out and my dog is smiling at me and wants to meet the friendly motorcycle gang member. Bike after bike now starts coming onto the Pier. I’m like, “fuck, this is really a gang.” There were about 20 of them!

And I stood there trying to keep them from going down the Pier as they rev their engines. There was a photographer there and he snapped a quick picture. 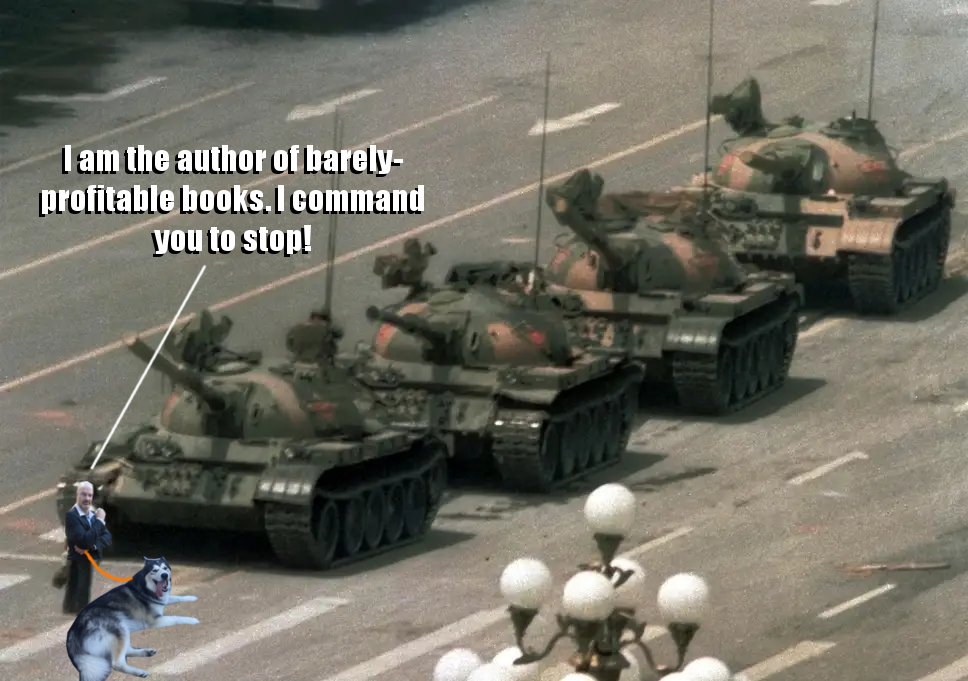 It was actually looking bad. Cuz they were like, “hi, we’re a fer serious gang with our names and insignias on our jackets and you’re just a dude with a dog wearing cargo shorts.”

Then a few people started coming up behind me. Guys from restaurants or just walking around. And old woman was nearby trying to say they couldn’t ride here. There was high and low commentary yelled out. People calling them losers (but not standing very close). And other people in the way more cautiously stating their cases.

I called 911. Took like a minute. Then she’s asking me all these 911 questions like I don’t have 20 motorcyclists yelling at me and I have time to explain all the peculiar philosophies of life. I hung up after I got my info out.

More and more people started to come forward and the few cyclists who had made it through, circled around and came back. They had mostly gotten off their bikes now and it was full on confrontation. Gang vs. Spring Break Hermosa 2019. WOO!

Everyone was saying, where the hell are the police? #HermosaBeachPolice And I certainly echoed that sentiment. Guys were about to throw down. For some reason, I was no longer the central antagonist, even though I had started it. I couldn’t make out all the threats and gestures, but one guy said, “you’re too old, that’s the only reason I’m not kicking your ass!” And he wasn’t even talking to me, he was talking to the guy who looked to be about his age. Give or take.

But the tide had turned. The crowd was too thick and even the Hermosa Police might eventually show up one day. It had to be at least 10 minutes this all played out. It wasn’t like some brief moment of excitement. There was a lot of motorcycles sitting on the Pier.

But they got on their bikes, made some quick revs, and headed out the way they came–not down the Pier. The brave morons who had dared them bikers to kill them, so they wouldn’t have to write any more non-best-sellers or pick up mushy dog poop because my dog keeps eating trash, hung around commiserating.

About ten(!) people came up to me and shook my hand or said way to go or thanks. One little girl walked up, her leg in a brace, her body clearly wracked by Polio Pox and Whooping Scurvy Sickness said, “Thank you, sir. It’s dumbfucks like you that make us smart people feel safer.” (Okay, that last part didn’t happen.)

About a half a mile away people were still thanking me. They said that was very brave. And I was like, “I’m still amped up on adrenaline.” And I was. It’s been an hour and I still am.

I left an angry message with the Hermosa Police. I apparently wasn’t the first, because the operator goes, “is this about the motorcycles on the Pier?” I do want to thank my fellow Hermosans, tourists or residents, for getting behind me. Literally. If it was just me, I honestly think I would have been run over or knocked aside. Would have been bad. Unless I died. Then I probably wouldn’t have had an opinion. Unless I went to Bad Dog Owner Hell.

A newslady from channel 4 NBC came over and asked to do an interview. Apparently, crows are attacking people in the park to protect their...