I was a computer programmer for many years. I could probably get a job today as a PC helpdesk person. I would be bad and lazy, but I could do it. I had my computer crap out a few days ago. I went through a big cleaning period not long back and I decided to save my “gut-pile” (my huge collection of cables and devices from zillions of old computers) and my previous computer. Sure enough, I used that stuff to test what was working and what wasn’t. It took ages. 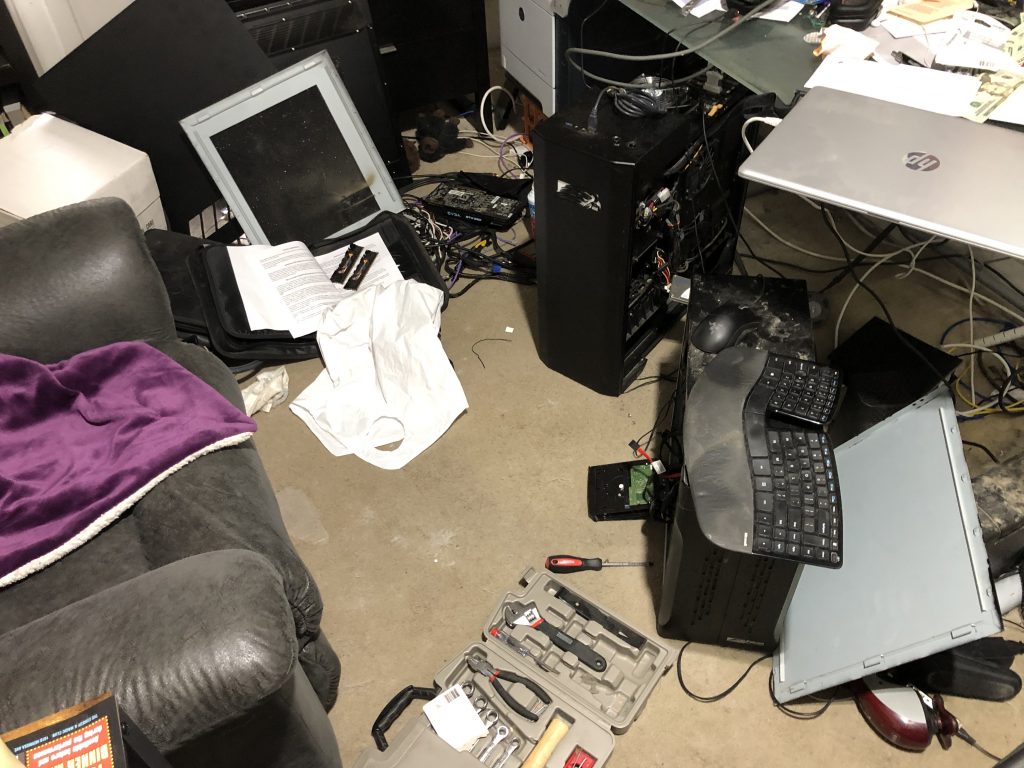 This was me midway through. And I was doing all this nonsense. Swapping cards and cables and working in the BIOS, I was thinking that computers have come a long way, but there is no way in hell the average person is going to do this. I didn’t want to do it. Think about automobiles. If something is wrong with you car, it can tell you exactly what. Maybe not you, but the mechanic can plug in and know. Computers are like, “well, it’s either your modem, your motherboard, your cables, your provider, your settings, someone downstairs playing a trumpet, or 93% something completely different.”

In other news, I rarely drive. I live in an area where I can bike ride a lot or walk. Saves gas. My 2010 car has about 37,000 miles on it and I bought it with I think 13 or 16,000 miles. My sunroof curtain started drooping and I was like, “was it always like that?” I think I’ve opened the sunroof maybe twice. Once by accident. So I tried to open it and pang, bong, bing, the spring popped out and it unspooled. So of course this is like a half billion dollar problem on my 2010 car which isn’t worth a half billion. I got repaired all the was necessary and made plans to sell it.

I uploaded my documents and sold my car online and used the value to trade in for a new (used) car. This is one of the promises of technology made real. A complicated transaction involving lots of legal issues and haggling became absolutely painless and data-driven. My car is going to be picked up and the other car dropped off. And I’m going to sit here scratching my butt.

I used Carvana but I’ve used Carmax in the past. I WILL say, however, that I noticed an odd notation on another car on a different site. It was a great deal. I had been going between multiple sites and comparing warranty, miles, options, what paint lasts longest, what cars got the best reviews and records, etc. One car I was really interested in, said it couldn’t be transferred to my local company. I’d have to go to pick it up. It wasn’t far at all, but I wondered why that was. And I looked up that value and it had a real meaning. Some cars can’t be transferred 3rd party if: they have too many emissions; safety issues; not a clear ownership title.

It certainly wasn’t the first two. So the reason the card was so cheap was because there was some issues with the title! But I had to investigate that. So be careful.