A few years ago, I was flying back from the east coast to the west coast, when I encountered the worst travel conditions of my life. First off, I was standing around at the overcrowded terminal, without even a place to sit down on the floor. I had devolved into cattle like everyone else. We were farm animals being herded around airplanes.

I had seen some “excitement” around someone, but I simply didn’t care.

We finally boarded and I had my usual exit row seating. I’m about 6’4″ and flights are not very comfortable. I noticed the person about whom all the excitement existed was Senator Warren. She sat in the row behind me and a seat over. If it was possible for me to stretch out, I would have been on her lap.

An electrical storm was over us, causing delays. And then lightning struck the facility, which required all the ground crew to take shelter for their safety. This happened several times. I was thinking to myself, “they can’t screw us over too much, there’s a federal senator on board.” Shows what I know. Hours and hours and hours passed.

Then they said there was too much crosswind for us to take off from the usual runway directions. So an entire international airport of passenger jets started driving. Driving! We were cruising around on the ground like a perverted freeway. We were trying to get to the otherside of the airport so all the planes could take off from a different direction. But the electrical storm followed us. Because why wouldn’t it?

At some point, I’m guessing a month or two later, we were finally able to take off. I was stuck in my clothes, had sucked down recycled air, and had been squeezed into a pretzel by my spacious seating.

When the flight attendant came by for drinks, I think I ordered something like quadruple double shots of vodka. She gave me a sour look as if she didn’t want to have to deal with a tall drunkard on top of everything else. But I held firm. I was worried the electrical storm was going to strike the plane and take out all the booze and pretzels. Because this storm was clearly an asshole.

I watched a movie on my tablet and was laughing uproariously throughout. I think it was a movie about infant suicide among deaf-mute puppies. I didn’t care, I was going to enjoy myself, dammit.

I was vaguely aware of Senator Warren maintaining her cool and talking politely on policy matters as I threw pillows and vomited into the middle seat.

When we landed in Los Angeles, I was pretty damn happy to be alive. Not just because of the flight, the storm, the booze, but because I had learned about puppy suicide and how it could strike at any moment. I saw Senator Warren. She was in very good shape for her age and I suspect she was somewhere between 3′ and 5’4″, it all looks the same when you get below my sternum.

I asked her if I could take a picture of her. She said, “come on over and take a selfie,” beaming a huge smile. I want to point out, this was long before she was running for president. She was a Vermont Senator and nothing else–though that’s plenty. We enlisted someone to snap some pictures. I had to hunch down, bending my knees, to get in frame with her and she put her arm around me. You can see from my fat face just how much larger I am. That’s not perspective or some crazy camera angles.

I’ve since contributed to her campaign. Anyone who stayed that cool and happy during the worst flight in history, has got a good pedigree, IMHO. 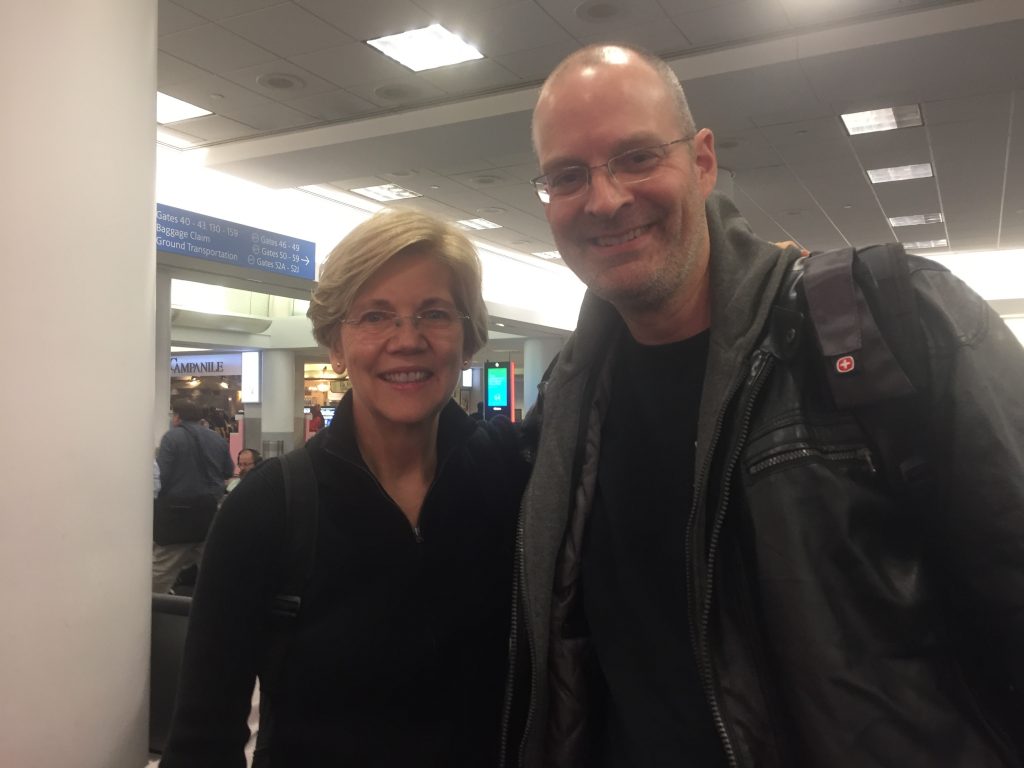