I was a little late to the whole micro-funding movement. I never thought much of it. I used Kickstarter to try and fund my very first book and I was not happy with the whole process and model, despite reaching my goal.

However, I sell products. And my method of selling those products is kind of stuck in the year 2000. I can put out a book and audiobook and that’s about it. It takes a whole lot of work and confusion to do anything beyond that. Making a book with an alternative cover is fine for paperbacks and fine if someone else is keeping track of those things, but it’s kind of meaningless for my purposes. Even the most stripped-down car or electric-bread-warming-device has tons of options and styles and price points. But I have one book and that is irksome. The tools that Amazon provides writers is a lot less than they provide nearly any other merchant, despite the fact they started solely as a bookstore.

This is a long way of saying I have a Patreon account.

Again, I was very down on the whole concept until I realized that artists and writers have had to rely on wealthy patrons since there were artists and writers. Da Vinci wasn’t painting church ceilings because he liked the angle, he was doing it because they could afford to pay him. Hell, even Shakespeare had a patron in Henry Wriothesley, 3rd Earl of Southampton. The great writer, Samuel Johnson, famously put in his 1755 dictionary two definitions for patron, which shows how he felt about having to rely on their help:

Anti-establishment figures ranging from James Joyce to Jackson Pollock had wealthy patrons. And the number of photographs and portraits of rich people over the centuries far outstrips those of the poor or merely middle class.

But the cool things about the modern tools is I don’t have to toady up to a billionaire to make ends meet. I don’t even know where billionaires hang out. The moon?

My Patreon account is a way to microtransaction a little extra grocery money.

IF you would like to help support my writing and those I employ in pursuit of my writing, feel free to kick in some money on my Patreon account. Besides feeling like a bonafide patron of the arts, you get some backstage access. I’m in the process of putting my behind-the-scenes notes and files for every book up on my Patreon, which is available to subscribers of any tier. If you’re a writer, an aspiring writer, an artist, or a major fan of the work, I think the files would be of interest. It’s an awful lot of information and you can see how the notes->drafts->final and the big changes from idea to culmination. If that stuff doesn’t interest you but you want to be supportive, that’s also great.

Here’s an example I have yet to put out.

Below is MY drawing I gave to the artist, along with lots of description, on what I wanted for the cover of Hard Luck Hank 6: Robot Farts. You can see I originally had Delovoa lying on the ground looking pretty awesome and chill. Sometimes I feel I missed out on my true calling as a fine artist. My use of color and lines, both straight AND jagged, are pretty amazing, you must admit.

This would be translated to an early sketch by the artist: 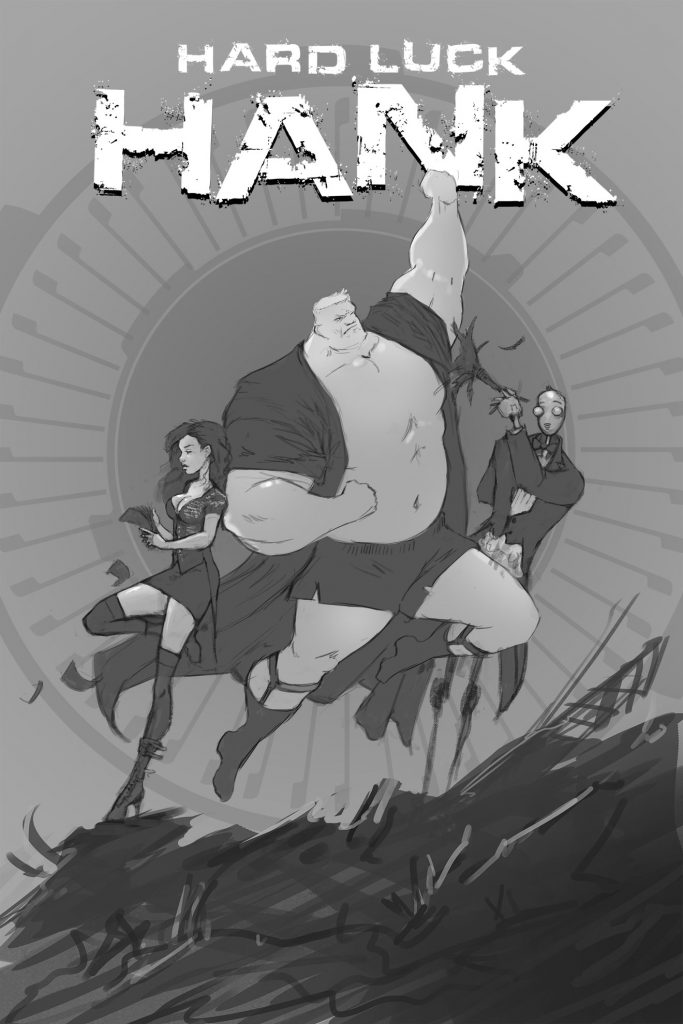 If you think my books and efforts aren’t worth any more money, I’m amazed you read this far! But that’s also quite okay. I just thank you for being a supporter of any kind. Seriously. This is for the people who want to contribute more. I will also likely be pulling my beta readers from that pot for my next book series.