When I was working at an oil company as a teenager, I thought it was the height of folly to have your business based upon the luck of finding an oil pocket. That’s all it was. This nothing little oil company stumbled around Alaska and found the motherlode and became a top 5 global player. What became Atlantic Richfield, then Arco, and then BP Arco. We had pictures of the old skyscraper (Richfield Tower) in downtown LA. There were these golden statues sitting up way high. I met a guy whose father had been around and working at Richfield back then. Those statues were plated in actual gold! When they destroyed the building, they cut up those statues and gave the busts to Directors. One of them came and was like, that’s hideous, and didn’t take it. One of the guys who had operated the concrete saw to cut the statues took it instead. It’s like 3 feet tall, larger than a man’s upper torso, sitting in his flower garden. Everyone thinks it’s just an ugly scarecrow painted gold. He says he’s been waiting for his father to die so he can melt that down. These things:

They were gold plate. Not sure how much gold goes into something that size and before modern electroplating technology. 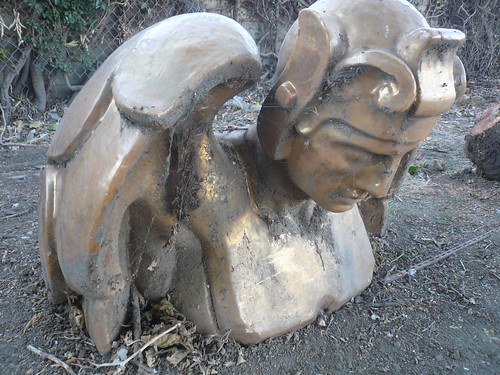 I remember that story because I was talking about how shitty a business model it is to rely on luck. But it’s entirely how the creative arts work. Specifically, writing.

When I was reading about JK Rowling, she was rejected countless times. The most successful author in the history of writing was rejected all over the place and finally got a $1200 deal. And that was pure luck. The same is true of zillions of others. And when I go to the Nebulas or otherwise hear editors and agents speak, they talk like the royal kingmakers they are. It’s a ridiculous business model.

Every product has creativity somewhere about it. A car or stereo or computer has many choices that will entice some buyers and turn off others. What if Ford or General Motors or Ferrari or Apple had as a business model that random people had to submit new products? 99% would be rejected in the mail room for any number of reasons, including not liking the envelope. And it’s a strange set of relationships, like having the same dentist as a mechanic at Ford that allows you to pass your blueprint into the company, where it gets passed on to a supervisor, and to a manager, then to a chief manager, then to a procurer, then to a vice president. And every step along the way it can be denied or lost or forgotten. That would be insanity. No company would operate like that. Stockholders would go nuts and say they need a real pipeline that can be depended upon. But books/movies do that all the time. There is no set way to break in and there never has been.

When I would go to those WGAw meetings and listen to professional screenwriters, we would all ask the same question: how do you get an agent? And they never had an answer. Not once. Because every single one of them had a different way. Entirely different. That’s ludicrous. It’s basing an industry and career on luck. And it’s been like that ever since the studio system collapsed. The super famous screenwriter IAL Diamond had said the same thing. Every time he gave a talk about screenwriting, everyone asked him how do you get an agent. He found that annoying. I get his frustration, but he didn’t understand the frustrations of those wannabe writers. Craft doesn’t matter if no one will ever read your writing. You’ll be the best-written writer in your basement.