I love me some shrimp. I bought a bunch a few days ago and decided to post my whole “cooking” process, which is insanely easy. I used large, deveined, wild caught, white shrimp. I could save a few bucks if I deveined myself, but it’s kinda gross. One of my few memories of my maternal grandmother was being in her kitchen in Mobile, Alabama when I was maybe 3-5 years old and deveining shrimp by hand. A LOT of shrimp. At some point I got so nauseated I had to leave and take a break. And that experience has stayed with me. They have clever tools to make it easier, but it will add prep time for sure. I’ll have to price it to see if it’s worth it. 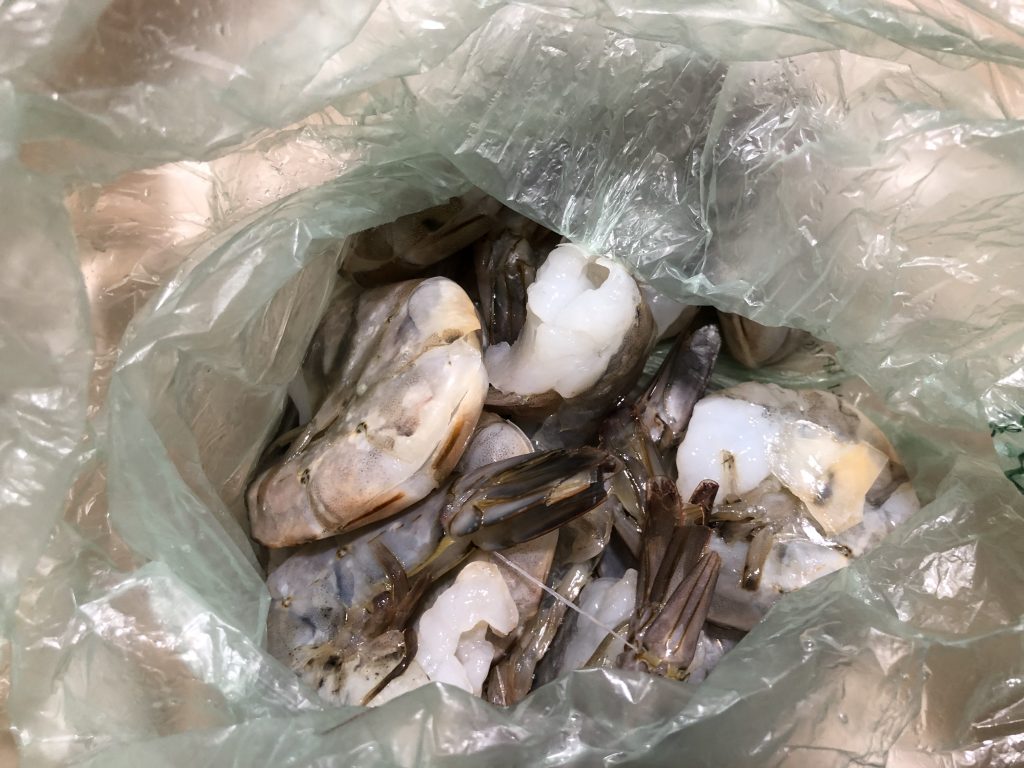 They more or less look like the above to start. And can run anywhere from $5 to $20 a pound depending. The farmed are more sustainable, but have worse nutrient load. 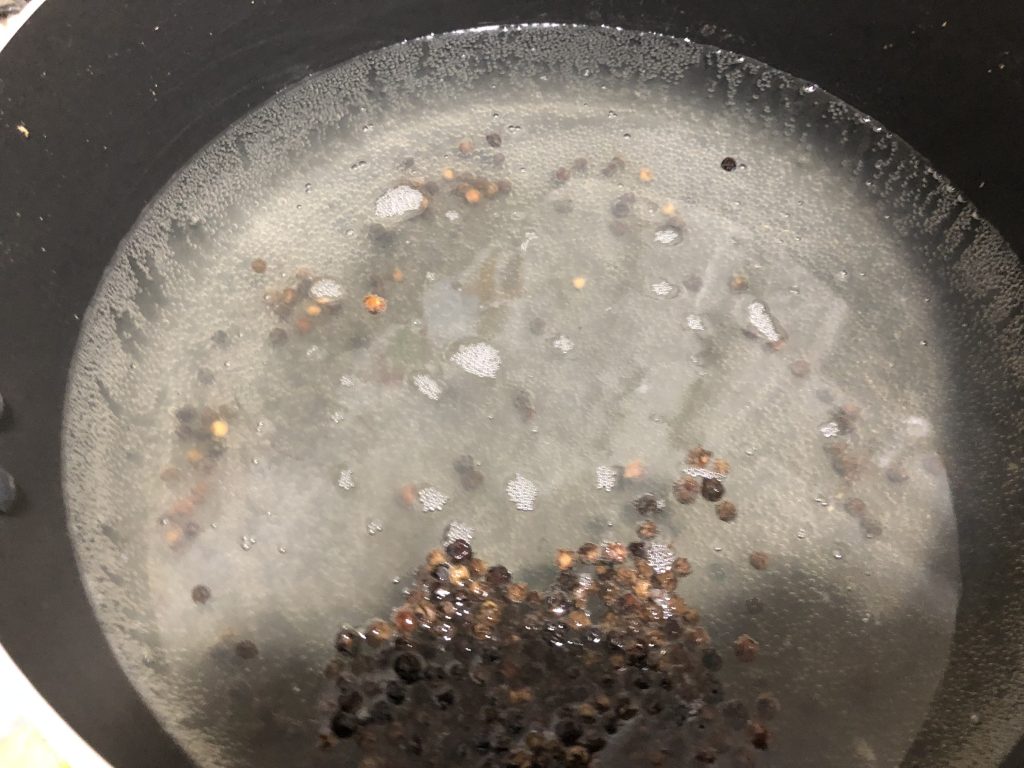 Get a pot of water boiling. I added peppercorns immediately, because they aren’t cracked and it takes a while to soak. If I ground them, it would be more instant flavor. This isn’t needed at all. Probably changes flavor 1% or less. But I got a ton of peppercorns and by damn I’m going to use them. 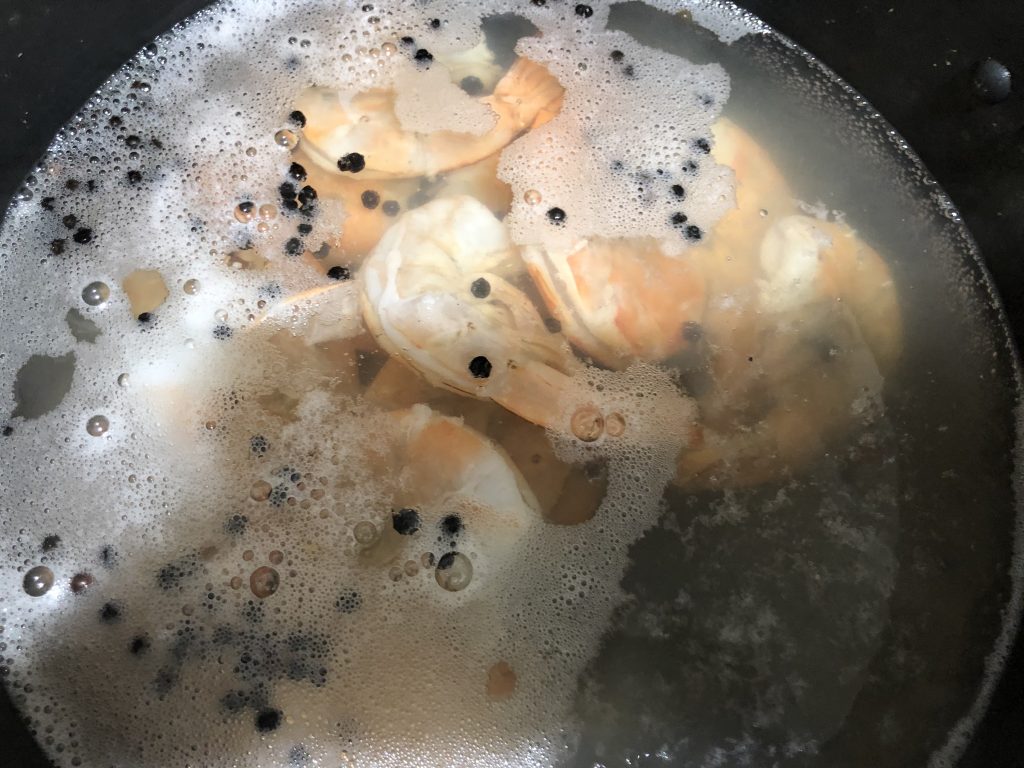 Get your shrimp in. Shrimp cook insanely fast. At a boil, maybe 3-5 mins. But since they were refrigerated, it cools the water and I want to get it back up to a boil. I set my timer for 7 mins. 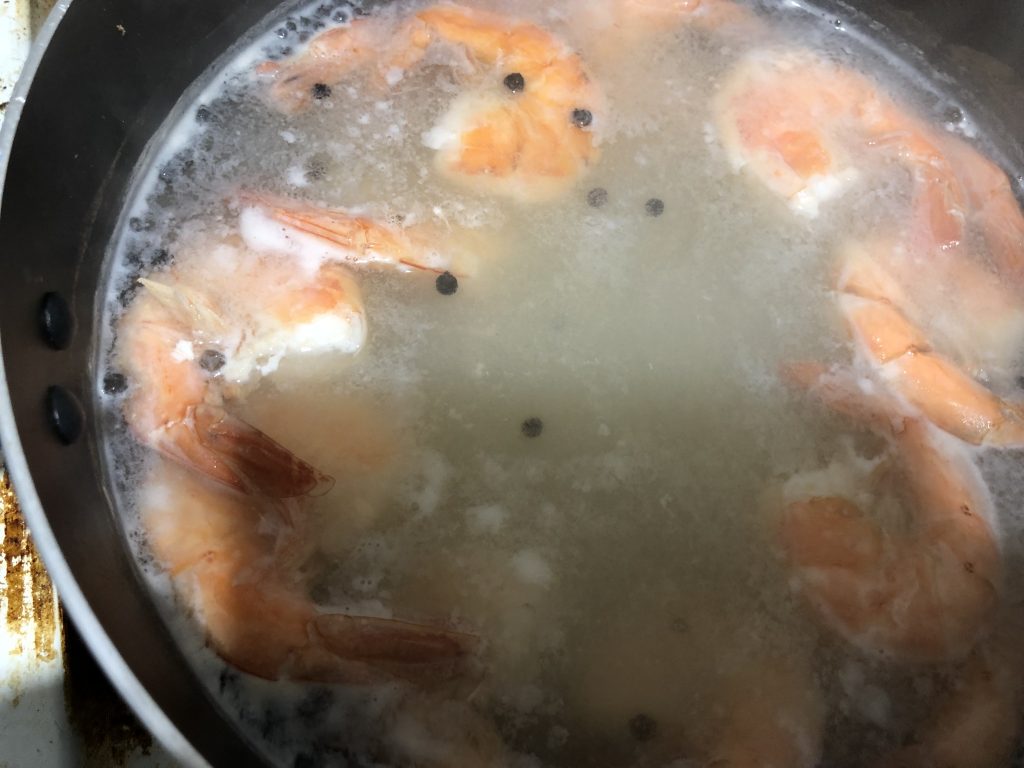 You can see the shrimp getting very pink/red. I like to wait until the split shells are kind of butterflying off as the shrimp itself swells from cooking. 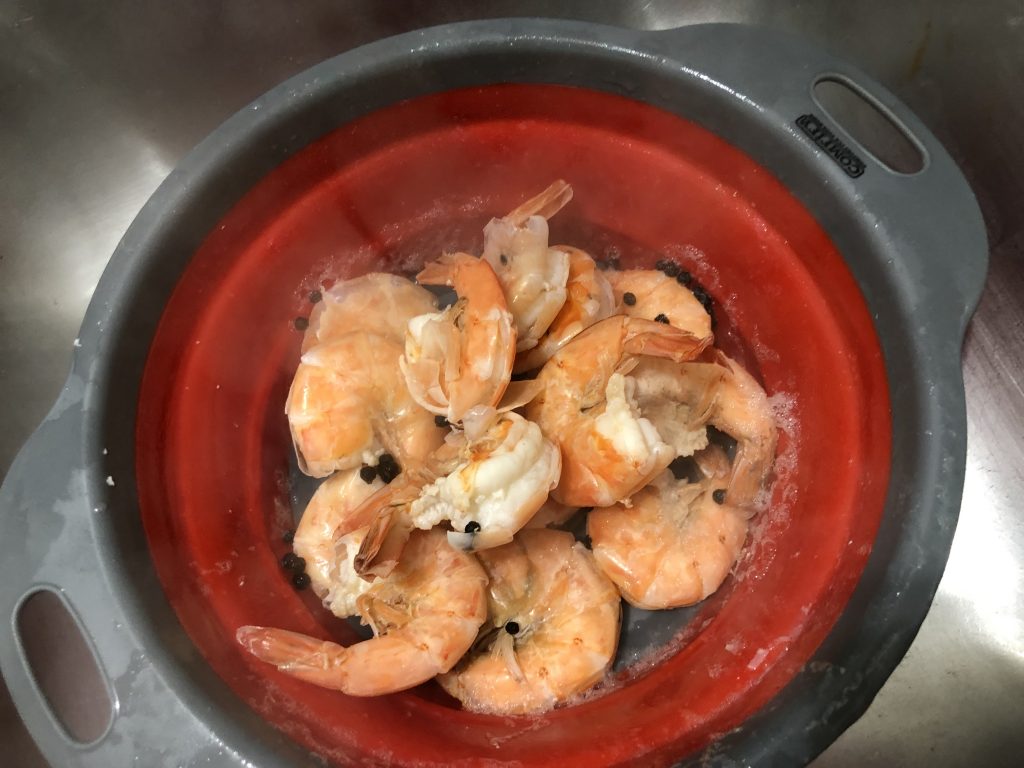 Strain it/drain it, however you like. Get out the byproducts and 5 metric tons of peppercorns. 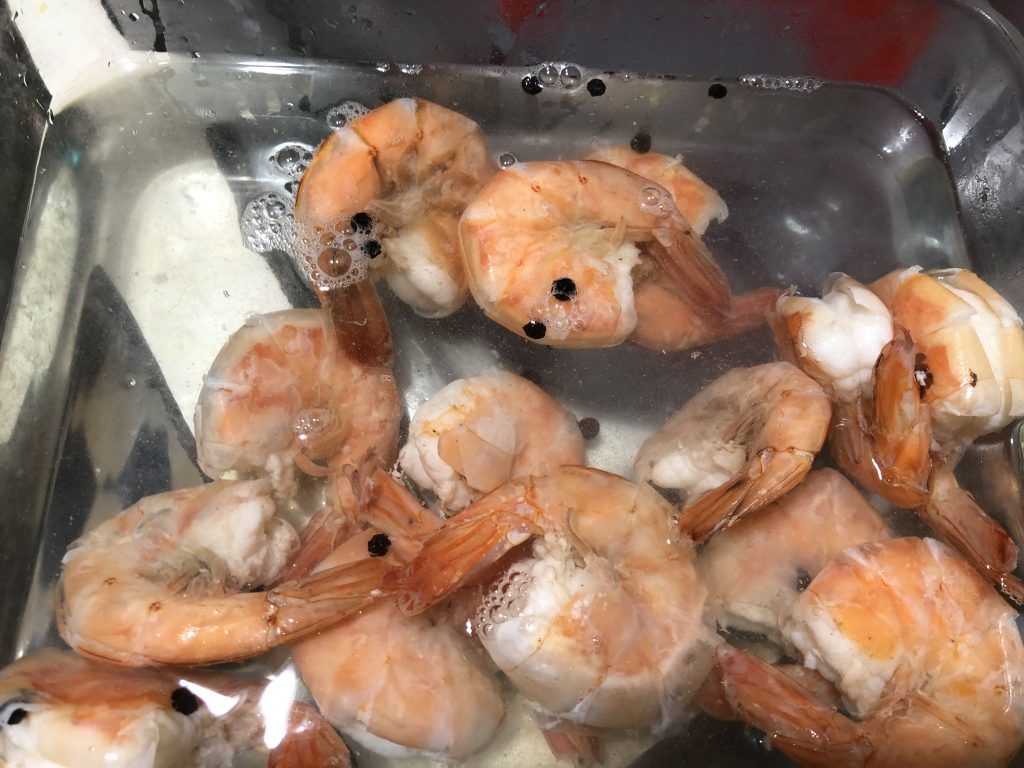 I then personally throw the strained shrimp into a bowl of cool tap water to stop the cooking process. 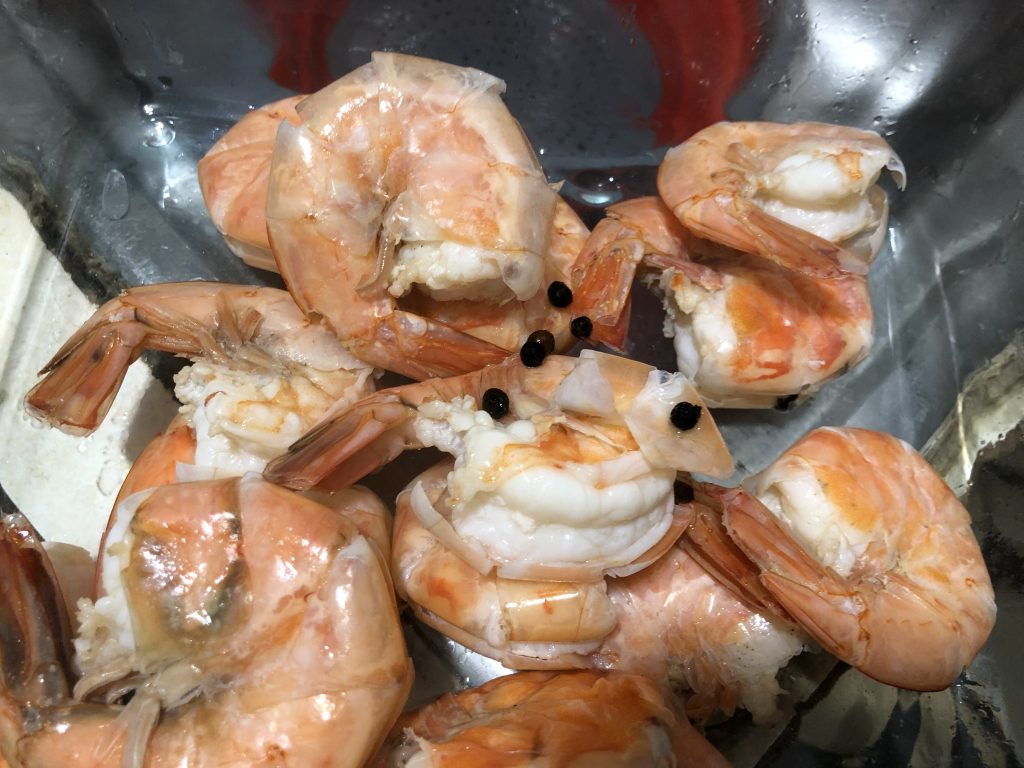 Strain again. Shake out all the water, and serve and eat. I mixed two cocktail sauces I had to good effect. This was just fantastically awesome meal. Including prep, cooking, cleanup, it’s maybe 15 minutes–not including time to eat. The amount of calories for fish in general and shrimp in particular is pretty miniscule. Which is one reason I’m trying to eat more fish as a protein. This meal was very simple and tasted about as good as the best restaurants, if I do say so myself. As for cost, like I said, it depends on where you live and where the fish is coming from and the quality. It’s not cheaper than peanut butter (like the ultimate in protein/calories:cost with a healthy dose of flavor). But it’s nowhere near eating out at a good restaurant. I paired it with some lactose free milk and half an orange and 1/4 small watermelon while they’re still in season.

I was sitting there in my Black Friday-cheap La-Z-Boy, flipping between the news and financial news and practically giddy with contentment.